skip to main | skip to sidebar

The Japanese extension of the Battle Beasts line, Beastformers, contained a good deal of unique products. The limited edition prize toy Striped Carp is one of them. It's part of a category of ultra rare items from the Beastformers line. It also falls in the category of the ugliest Beasts ever made. 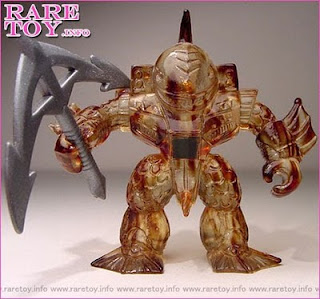 When I first found out about this figure, a friend and I were toy hunting in Japan. We came upon a unopened display box of Beastformers. This "Punch Box" display was part of a Takara campaign for the line. Kids would buy a chance to punch a hole into the top of the display and get the prize inside. Most of the box was filled with your everyday Beastformers. Lucky children could come away with special much rarer toys. The chances of getting a Striped Crap should have been 1 per box. However, some boxes have been found with no Striped Craps included. Since there's little in the ways of proving that a box was shipped without the special item 23 years later, it could be that some boxes had them removed.

When this discovery hit the net, it sparked a lot of interest among the Battle Beasts community. Not all of it gushing love and adoration. One collector mentioned that it looked like a Clear Carp figure that a factory worker mistakenly dripped soy sauce over. Most collectors wanted the figure however and it became a top ranked figure on their want lists. To this day it still ranks high in terms of rarity.
Posted by admin. at 9:52 PM

What's this all about?